It’s time to put on your thinking caps for today’s lesson! Think about where you get your food. Tell your adult where you get your food. Do you grow your food? Well, people in Colonial America had to grow their own food! On the farm they had animals to help them grow their food like a mule or another animal that says “neigh!” Can you guess what that animal is? The farm sometimes had animals that would lay eggs that could be used to bake a cake or for a delicious breakfast. What animal lays eggs? Can you name some other animals on the farm?

It’s time to color! Pretend that you are a farmer. What animals would be on your farm? Would there be a big red barn? What would your house look like? What would grow on your farm? Don’t forget to use lots of colors!

During the American Revolution, soldiers were given “rations” which were supplies of food. Sometimes soldiers had a haversack that carried a cup, plate, fork, knife, and spoon inside. But sometimes, soldiers didn’t have a fork and had to eat with their hands! They cooked for themselves over a fire they built. Have you ever gone camping? Have you ever roasted hot dogs or marshmallows over a fire?

Let’s see a real soldier cook! Watch this clip of soldiers cooking in the field. These soldiers cook beef and flower cakes with nothing but sticks and rocks!

Haversacks are what soldiers would carry food, and supplies in! 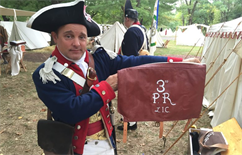 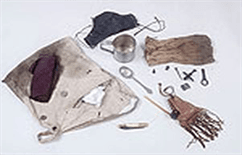 The colonials ate a lot of:

Browse some recipes of colonial dishes! Look through the different dishes and see which ones you would like to eat. Are there any you wouldn’t like to eat?

Here are some ideas: 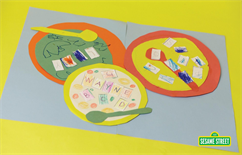 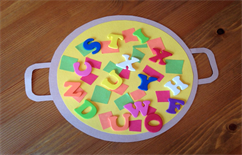 If you want to learn more about colonial food, visit Ducksters Education website with your child!