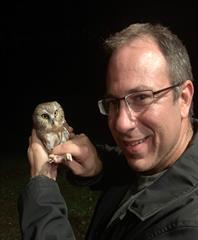 Dr. Daniel P. Duran is an Assistant Professor in the Department of Environmental Science at Rowan University and Naturalist for Scotland Run Park. He has published research papers on new methods for species discovery, biodiversity science, and molecular phylogenetics.

Dr. Duran has described 12 new species of insects, previously unknown to science. He received a B.S. in Environmental Science from Stockton University in 1998, an M.S. in Entomology from University of Missouri in 2002, and a Ph.D. in Evolution and Ecology from Vanderbilt University in 2010. In between his degrees, he has also worked for the Natural History Museum, London, UK, and the Smithsonian Tropical Research Institute in Panama. Dr. Duran is a co-author of the book "A Field Guide to the Tiger Beetles of the United States and Canada, 2nd Edition."