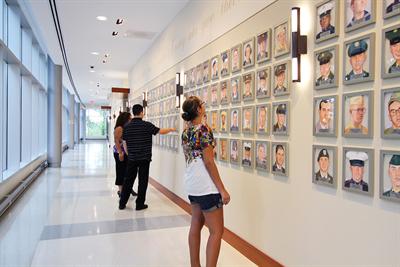 The Gloucester County Board of Commissioners has commissioned The Wall of Heroes as part of the Justice Complex expansion project. The Wall of Heroes will honor the men and women who were killed in action or missing in action while serving in the U.S. Military protecting our freedoms and rights.

The portraits will be a reminder to all of us that freedom is never free and that those who were called to go into harms way and did not return will not be forgotten by a grateful nation. For their sacrifice we still live in a land of free people. The Wall of Heroes was dedicated by the Gloucester County Board of Chosen Commissioners on November 11, 2010.

If you know of any Gloucester County veterans from your community who never made it home, please help us to include them in the Wall of Heroes. On this webpage, you will find the eligibility guidelines, an application (PDF) and photo examples. The application is the first step to being included on the Wall.

Because The Wall of Heroes will feature an artistic rendering of those who made the ultimate sacrifice, photographs are of particular importance. If there is no photograph that can be found of the person to be honored, only the name and other key information of the military personnel will be framed on the wall.

The Wall of Heroes will consist of framed 5 by 8 translucent artistic renderings portraying reasonable likenesses of the persons whom we are honoring. The Wall will represent all branches of the military and they will be arranged by era:

The Veterans Affairs Office was responsible for overseeing the working group which consisted of a volunteer group of veterans and some non-veterans. This group established the following guidelines in order for someone to be eligible for inclusion on the Wall of Heroes:

How You Can Get Involved

There are at least 350 Gloucester County residents who never made it home. The Wall of Heroes will feature an artistic rendering of those who made the ultimate sacrifice so photographs are of particular importance. With your help you can bring to life those who lost theirs by providing photographs of eligible men and women. Our eligibility guidelines, application and Hero Lists can be found below or obtained through our Gloucester County Office of Veterans Affairs at 856-401-7660.

Thank you in advance for your assistance with this important project honoring those who made the supreme sacrifice for our country.